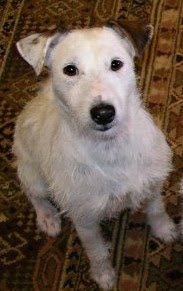 Nine years ago, we decided to breed our Jack Russell terrier, Scout. We did a lot of shopping for the perfect daddy. Scout met and loved Petey, her pups' father. As the pregnancy moved along, I used to hold Scout and rub her belly. When the puppies began to move, I could swear that one of them responded to my touch. Diane and I would marvel at the activity of this one pup when I would move my finger from different spots around this pups position on Scouts belly. The morning the pups were born Diane and I stood at the ready to help as needed. Scout did all the work but with the birth of the first pup she was confused over what was happening and tried to go after the newborn. I took the pup in my hand and held her. I could swear this was the pup in the belly by the reaction to my touch. She snuggled in and kicked her legs like she was trying to become a part of my hand. We named her Majik. She was magic. After a couple of more pups were born, I returned Majik to her mother as the instinct had kicked in and Scout was ready to clean and nurse this baby. 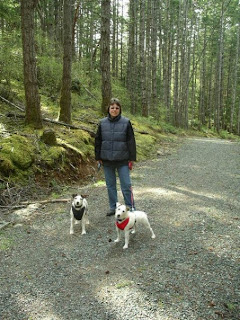 But the bond had been made.

As the time came to place the pups in new homes we agonized over whom to let the pups go to. All new owners had to sign a contract that if the ever wanted to sell/give the dog away we reserved the first right to take the pup back. This letting the pups go to uncertain futures was so painful for us that we ended up neutering Scout. Puppy days were over. We ended keeping 2 of the pups. Majik and Montana. We called them the twins. 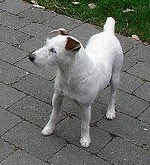 Majik was a complete love. She loved to be held by me and she would rub her face and head against my face when I held and kissed her. One of our favourite things to do was to sit on the steps out back. I would hold her and ask her if she wanted me to tell her about the day she was born. I would recount for Majik the story about her birth and our bond. I would tell her that I have been with her from the time she was born and I would be with until the time she leaves the earth. This was my bond to this pup.

We board the dogs when we go away because we don’t trust anyone to watch them in our house. They are high maintenance with many personality issues we don’t expect people to understand. But they are our little family. When we left for Aruba 11 days ago, Diane and I told each dog how much we loved them, how many days we were going to be gone and above all, when we were coming to get them.

This was supposed to be a blog about our trip to Aruba. We just returned early this morning. But it has turned into another story. The night before we were to head back home, we got a voicemail that we needed to phone the vet on her cell straight away. The news was not good. We had just talked to the kennel the day before and all the pups were doing fine. On the morning of May 23, 2010 Majik didn’t want to eat her breakfast. She just went and lay in her cuddler bed. The kennel help left her and came back an hour later and she was gone. I admit that I fell apart at this news and was probably not a lot of help to Diane who held it together to make arrangements. I was angry and wanted to blame someone. This was not supposed to happen. We were supposed to take our whole family home. Diane had the sense to order an autopsy and preliminarily we have learned that Majik had an enlarged heart and a very large blood clot was found that probably ended her life quickly. CHF. Now reading the symptoms of this disease, some symptoms that seemed benign, now begin to make sense.

Our hearts are broken. We feel all the feelings you can imagine. From being bad parents to we will never go on vacation and board the dogs again.

I just hope Majik forgives me for not being there with her when she left this earth as I was there when she entered it. I don’t know if I can forgive myself. I will try but the pain is just too great right now.

Diane will go to the kennel today to pick up Majiks belongings and cuddler bed. She will silently tell Majik that the mommas are here to get her and it’s time to go home. Come on home to us Majik.

Like every summer before this one, I will sit out on the steps out back and silently tell Majik about the day she was born.

Today we are sending in our applications for Canadian Citizenship. We have been living in Canada for a bit over three years. From what we hear, this will be an interesting process! It may well take as long as the immigration process took. I will keep you informed of the timeline and milestones as they occur. Wish us luck!
Posted by Canada Calling at 3:39 PM 4 comments: 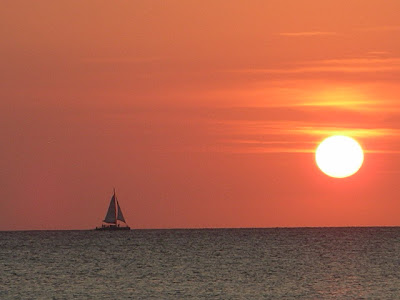 It has been 2 months since my last confession . . .

I have moved away from blogging and have been consumed by Facebook (crackbook). This is just a simple fact. I’m not saying one is superior to the other; Facebook is just quicker and easier. The blog started out as a diary of our journey toward immigration. We are moving toward year 3 since we have been in Canada and I guess I don’t have much more to say about immigrating here. I’m not sure how many USians are still looking to immigrate. Maybe changes in economy, housing, Obama, etc have changed things.

So I will tell you about our latest adventure. We spent 8 days on Grand Cayman Island. I have noticed how living in Canada has changed things about the way we travel. In the past, the first thing we would have done upon arriving in another country is rent a car. Sometimes the car would not be used for several days. It would sit in the parking lot. But we knew it was there if we decided to go somewhere. This trip was quite different. We used a taxi to get to our hotel but that was it. We used the bus to get everywhere else. It is a bargain at $2 CI to go anywhere one way. The buses are all large vans. They beep their horns at you as you walk along and you wave at them if you want them to stop and pick you up. They stop anywhere. There are designated stops but they will let you off and pick you up anywhere. The Caymanian people were warm, helpful and wonderful to us travelers. 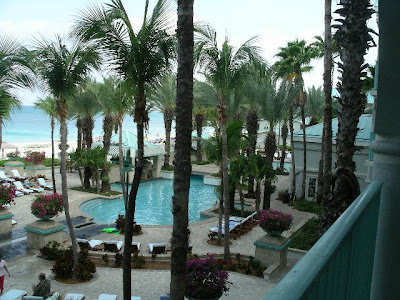 We met up with some American friends there and had a fantastic time. It was a much needed break. I spent the greater part of my time under the water. The beaches and ocean were like those postcards that you think have been photo shopped because no beach can be that beautiful White powder sand and turquoise blue water. Exquisite! The snorkeling was some of the best I have ever seen. Right off the beaches in front of the hotel were reefs and hundreds of fish. It was amazing. I took more pictures of underwater than land photos. 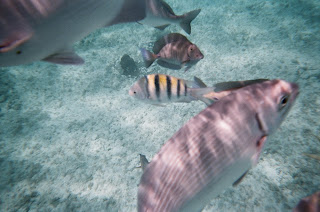 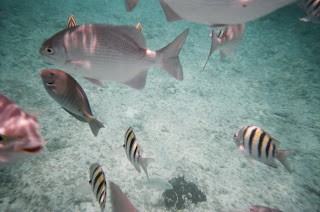 We took a tour to Stingray City. This is a reef in the open ocean that hundreds of stingrays visit. The photos below will speak for themselves. 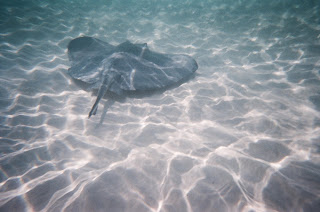 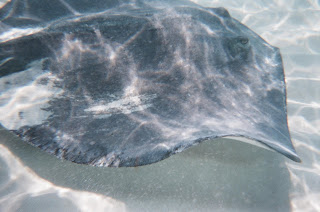 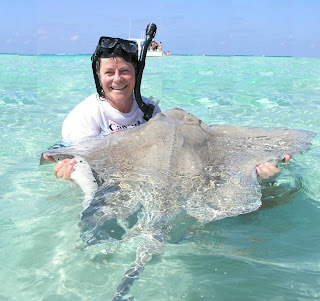 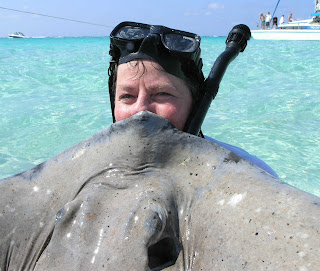 Pirate ships would pass by on the ocean. Sure they were for the tourists’ eye, but hey, that was me. My friend Teresa and I posed by a corny tourist statue with a pirate, the good kind of pirate. Teresa and I went to high school together. She and her husband Jim were fantastic travel mates. 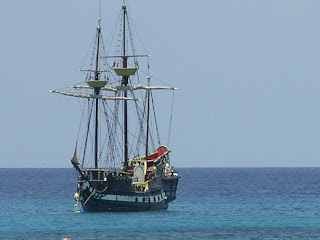 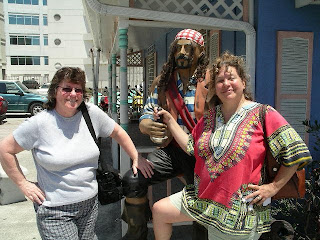 Every night the four of us would meet on our patio to discuss the problems of the world. 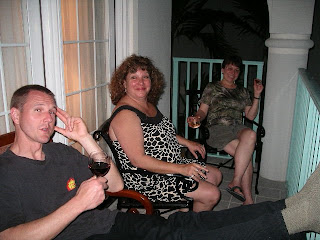 Quite a few nights we spent trying to figure out how to live in this beautiful place for half the year. 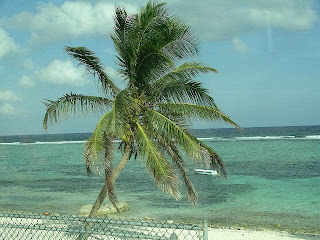 I do love my Victoria in the summer, though. I feel no need to go anywhere else once the farm stands open up and the organic markets are in full swing.

Iguanas roamed the island and it was quite common to run across them on your way to the beach or dinner. 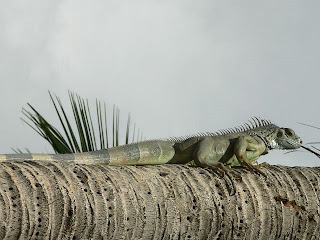 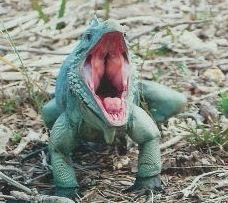 Diane could legally buy Cuban cigars and rum for the first time in our travels. We only got a wee bit of flack from the American customs agent in North Carolina.

Now we are back into the swing at work and missing our vacation time. The next thing we have planned is Las Vegas for American Thanksgiving.

I will try to post more often but if you friend me on Facebook I post on there more often.
Thanks for tuning in.
Posted by Canada Calling at 5:27 PM 3 comments:

This is a Flickr badge showing public photos from CanadaCalling. Make your own badge here.